The heritage of our Club Crest and Burgee is a subject, it seems, of endless interest. While the Saltspring Island Sailing Club was born in the 20th century, our symbols originated more than a century earlier, linking us to a rich maritime history. A number of members have contributed to the brief article below, including Past Commodore Wayne Pearce, Nigel Denyer and Robert Borbas.

Why an elephant on a Sailing Club burgee? New members or visitors often ask this intriguing question. It came from the badge of HMS Ganges, a Royal Navy sailing ship which plied these waters in 1857-58, and the historical link HMS Ganges has with this area and our Club takes us into the archives of British naval history.

The Ganges was actually the second Royal Navy ship to use the name which our village and harbour share. Ordered in 1816, and built at the Bombay docks in India, the Ganges was a replica of HMS Canopus, which began as the French warship Franklin and was captured by Nelson at the Battle of the Nile in 1798, becoming his flagship. Robert Seppings, outstanding Naval architect, adapted the design to British construction. A distinguishing feature of the Ganges is that it was one of the first all-teak British warships. This choice of materials set off a stormy debate in Admiralty circles, where it was claimed that these ships must be constructed from hearts of oak. Britain, however, was running out of oak with as many as 900 trees going into the construction of one warship. 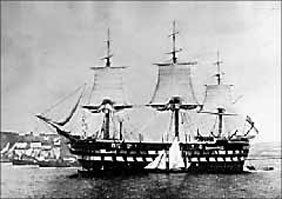 The Ganges was the first of nine ships with the same basic design, built of teak at Bombay, and was a second rate ship carrying 84 guns and 700 men. She was 196 feet long with a beam of 52 feet. Launched in 1821, she sailed to Britain where she was commissioned in 1823. In 1858 HMS Ganges was ordered to Esquimalt. Admiral Sir Robert Baynes was the Flag Officer and Captain John Fulford the ship’s captain. With the Fraser River gold rush, Fort Victoria on Vancouver Island had become the stopping off place for many prospectors heading for the Fraser River en route from California. As a city of over 6,000 tents grew up around the fort, Governor Sir James Douglas became concerned over maintaining law and order and asked Britain for assistance. Britain also was worried that the influx of Americans could threaten her claim to the area. The Ganges remained in the area for about two years, charting some of the local waters, examining and issuing licences to prospectors and generally “showing the colours” in the Pacific Northwest. 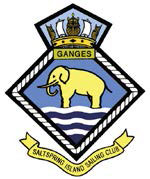 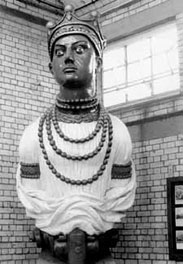 HMS Ganges sailed for Britain in September 1860, the last sailing ship to arrive in Falmouth, and remained there for 33 years, training some 14,000 boys for naval service. In 1899, the Ganges moved to Harwich. It must have been an exciting experience for the boys of the ship’s company. In Summer’s book HMS Ganges, he records that at 10:45 am, 29 August, 1899 the Ganges slipped her moorings at Falmouth and was towed out of the harbour. After lunch the boys were called upon to put into operation the sail drill they had practiced so assiduously at Falmouth. At Commander Anson’s orders the ship made plain sails less royals and flying jib and, as if to illustrate the beauty of sail, the wind freshened. From Davenport two weeks later, she made sail for Sheerness and for a time travelled independently of the towing vessel, eventually proceeding to Harwich where she arrived, November 11, 1899.

The following July, HMS Ganges sailed out of the harbour never to return. She continued to serve in other roles under other names until 1929. Today some of her timbers form part of the staircase at the National Maritime Museum, Greenwich.