The Groundhog Day Race starts with the breaking of pancakes and the eating of hearty food before venturing forth. Much thanks to the racers who started the day behind the stoves and fed the masses, a job well done. Being a reverse handicap the start was staggered in the hopes of giving an exciting and crowded finish. Thanks to Philippe for doing the math on this and getting this large fleet sorted out. First away was Jeremy Millsom in Sable on a dying wind out of the harbour. The large boats rightly bunched close to the line to avoid missing their starts making for a crowd on the start line unusual for this race. Good seamanship kept all boats clear of danger and one by one they got off with a very small margin of head start for the slower boats. Both Bravo Zulu and Deryn Mor hit the line with spinnakers climbing the mast and bows right on the line. Paramour, single handed by our new Commodore also made an impressive start. Soul Thyme scrambled to retrieve a halyard, dropping main and hoisting a crew member aloft as the time ticked by, completing the task in short order. What could have been a “Broken Tiller” moment was salvaged by good seamanship. 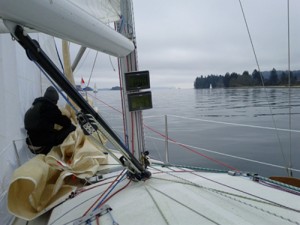 Deryn Mor drifted to Goat Island, while Sable and Bravo Zulu struggled up the middle of the harbour. Kay D gybed over and played the Walter Bay Spit, close enough to shore that the tactician could monitor the tide by the direction of the seaweed on the bottom. This allowed them to drift into second place behind Sable and then into the lead when Sable chose to motor out to the Sisters and find some real wind. For a long time this looked like the tactical move of the day as the becalmed fleet watched the dot of Sable on the horizon heeling and moving smartly. Then the Kay D caught the wind and started moving. She was aided by the slow progress of the wind, seeming to take forever to get to the rest of the fleet, giving her a good head start by the time the wind filled in.

Kaitoa, Imp and Caliente were soon in hot pursuit, with Kaitoa finding a good lifting blast that brought her through the fleet to claim the lead. Imp also moved through into second and Caliente crossed ahead of the Kay D before Batt Rock was reached. These four had opened up a good margin on the rest of the fleet, most of whom where driving of on Starboard heading for the “River”, the tide race that pushes boats to Batt Rock. Oasis, favouring the middle ground seemed to be leading the second group. On rounding spinnakers were again raised for the broad reach to Welbury Spar Bouy. Imp drove low in a daring tactical move that took nerves of steel as the other three in the lead group romped for the mark on a beam reach. Had Imp noticed the slowly clocking wind on the beat? Two more lifts on this leg saw her reaching up under Kaitoa on a hotter angle and sailing in less tide to become the fourth leader of the race. After rounding Welbury Spar it was a tight reach under spinnaker for the Second Sister with Craig and Cookie on Imp putting on a crewing demonstration. 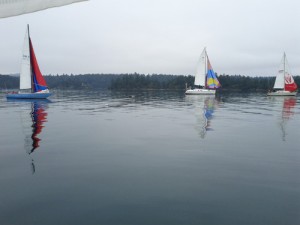 Not to be outdone Kaitoa also put the pedal to the metal with Eldin and Kim working the sails keeping the fast slim yacht right on the edge. Caliente was headed just before the Second Sister and struggled to get around the rocks but Ole and Iain managed to wrestle her around. This leg also proved to by exciting for the second group, who had suffered some slack wind but were now coming on strong. Oasis and Electra had a grand battle and Albatro streaked along picking up several places, nipping Paramour by two feet on the finish line. Wildfire suffered a broken gooseneck and was forced to withdraw from the race. The final run to the finish was marred by rain but that could not dampen the spirits of the racers. Kaitoa kept up the pressure on Imp right to the line, finishing only 15 seconds behind. So another win for the well sailed Imp and her skipper Greg Slakov and another race with a wide variety of conditions enjoyed by our growing fleet.

from the deck of the Kay D
Martin Herbert