The McMillan Trophy was donated by the McMillan family to honour Peter McMillan, Past Commodore 1977-1978. Peter is best know for racing a most beautiful 6 Metre, very hard and often with rails awash. One of our newer members, Mark Wallace, a very talented shipwright in Fulford has restored this boat and this year we had hoped to host a 6 metre race with this event. Things did not work out this year, sadly, but maybe next year we can be blessed with a sight of a fleet of these amazing yachts. 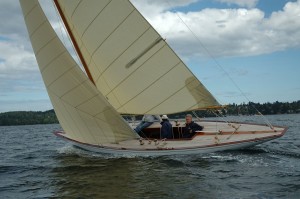 Here is a photo of Mark sailing Peter’s boat after the restoration. Mark is currently working on another 6 Metre and I am hoping to have some photo coverage of that in the next Telltales.

Eleven boats turned out for this years event even though two of our most enthusiastic sailors were otherwise engaged ( Roger was racing IOM’s in Nanaimo and Vincent was in the mountains). I would usually also have been racing IOM’s but with the arrival of a second Flying Fifteen at the club the local racing has just stepped it up a notch. The flat calm that greeted the first arrivals at the club was replaced with gentle murmurings of wind at the skippers meeting and actual breeze on the nose at the start of the race. Both the Flying Fifteens and Caliente played the club pin at the start and a short tack into Walter Bay seemed to pay as Kay D was able to cross Sprite in the early going. On the other side of the line Imp lead the charge to Goat Island and in the first of a series of good choices tacked on a header at Goat and came out on a great angle into the lead. Sprite had moved into the lead of those playing the Saltspring shore in the early going and was hanging in with the three fastest boats. Leaving the Sisters it was four boats abreast, Caliente,Imp, Sprite and Kaitoa, trying to find a fast lane to Batt Rock. Imp chose the Saltspring shore and seemed to by playing it hard and finding good shifts. This is a dangerous game and I have only seen Oasis pull it off before while I have seen many wallowing when the wind gods abandon them. However the wind looked strong right to shore. This from Craig Leitch “we were after tide relief, and yes we were close all right, bang the beach close, run the depth sounder to 11 or 12 and then tack. It worked well until closer to Batt, when the wind went lighter closer to shore and both Kaitoa and Caliente were able to close up; we only just got there before Kaitoa, and luckily were on starboard.” The Kay D was over to the left side hoping for a header and a puff and being seriously smoked by Sprite when first Imp, then Albatro and Oasis made the right side pay big time. We took our lumps and worked back over to the right, watching first Imp, then Kaitoa and Caliente round Batt Rock, just dots on the horizon. These three went on to have a lovely close race among themselves in a separate fleet. Next around was Albatro followed by Oasis, Sprite and Wildfire ( the only boat that had made the left side pay). About five minutes later the Kay D rounded, and having decided not to dwell on a long series of tactical errors by the skipper, hoisted spinnaker in pursuit. The first three were already at Peile Point, and seemed to be getting through to Trincomali Channel. Albatro, just behind the leaders was loosing her wind and had it shift against her. High up on the Prevost shore the wind seemed to be stronger but not coming down and Kay D tight reached up on the edge of this wind reeling in Sprite, Oasis and Wildfire. Soul Thyme also rode this wind until at last it faded and left the whole mid fleet windless in Captain Passage. Albatro found a line and sailed it low towards the entrance to Montague but by the time it reached the Kay D it had shifted allowing her to almost lay Ben Mohr. This closed her right to Albatro and set up a number of exciting crosses as they exchanged fourth place several times. Oasis and Soul Thyme threatened but shifting winds foiled their plans. 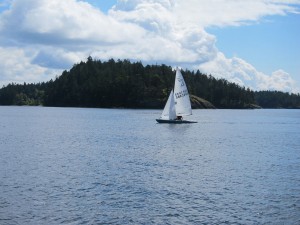 The three leaders were already around and heading home when Philippe Erdmer captured this shot of the Kay D getting the breeze for Ben Mohr. He was flying his spinnaker with the other hand. From this gentle beginning it built to having both crew hiked over the side as they rounded Ben Mohr overlapped with Arbatro. We threw the main over in an exciting gybe and went into spinnaker hoist mode when a loud bang from astern alerted us that Arbatro’s gybe had ended in her giving the mark a good thumping. As our spinnaker filled the Kay D leaped onto a plane as we beam reached for home. Astern we now had three big boat blockers between us and Sprite, who really had been robbed in Captains Passage. 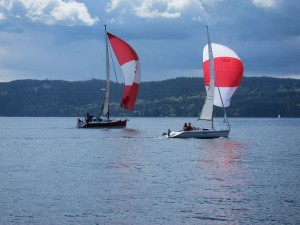 Meanwhile, back at the front of the race another of Philippe’s mid race photo’s shows how close it was with Caliente, Imp and Kaitoa. And this battle continued all the way down to the finish with Caliente taking line honours over Imp by the massive time of “one second”.

While this fine breeze was bringing them home a much stronger wind was compressing the fleet from behind with the lively Flying Fifteens making the most of it on the reach and with Oasis coming into her own on the last leg home as the wind swung aft and the little guys dropped off the plane back to hull speed. In handicap racing the advantage swings back and forth as the conditions shift and a close reading of the score sheet shows how a building breeze give the advantage to the slower boats as it reduces the time component of the distance lead that the faster boats have built. Over time this evens out as we have races where a dying wind does the opposite and the fast boats laugh as the slower ones bob about as the time ticks by. So it is with handicap racing. My one observation over the course of the last season is that I feel that Imp is too severely penalized by having to sail 25 seconds below her PHRF. To my eye Craig sailed an almost perfect race and should have been the victor on both systems.

After the race there was also lots of excitement as Oasis threw away her spinnaker sheets and flagged her big blue sail. The FF’s just couldn’t stop and planed back and forth after finishing giving whoops of delight as the spray flew.

Another great day on the water.

Martin Herbert
aboard the Kay D