The 2013 season started New Years Morning with a whisper as light wind greeted the large group of enthusiastic sailors, with fourteen boats turning out to race. The sky and sea were silvery and the calm beautiful in its own way. It was one of those days that rewarded full attention and complete concentration as the air came in breathes, never strong and sometimes withheld but always readable and with no wild card gusts shaking up the fleet. 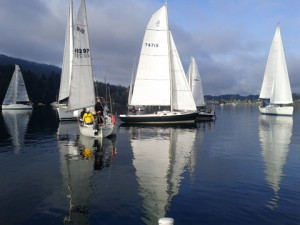 As always with light air events the race started in earnest well before the start gun with the importance of hitting the line at full speed critical. This means that the helm must be heading for the line a long time before the gun with no thoughts of manoeuvring and killing speed. The finding or making of a hole for clear air is also critical, so all senses were alert in the last few minutes before the gun. For some boats, with two minutes to go, there was the realization that they were already well behind…

Lesson #1: In light air don’t stray far from the line.

Richard Clark in the J boat Ricochet and the trusty Kay D both hit the line at a steaming 1/4 knot, nearly twice the speed of the rest of the fleet. Wendy Vine, steering Deryn Mor, with perfect timing hit the line with right of way starboard tack but almost no speed and threw a great blocker in front of most of the fleet. There was some conversation about which tack was actually Starboard as they rounded the start mark in a bunch, but leaving a slim gap just enough for Imp, coming in at speed to slip through and join the leaders in clear air. The first leg was a close reach to the 5mph speed marker. At least it was a close reach when the wind god exhaled. Between breathes the sails sagged in what was sometimes a velocity header and sometimes a real header. Here the patience of the helmsman was tested and tested again. Everything was in slow motion and the returning wind read as a huge lift on the sails. Aboard the Kay D we dealt with this by not steering over 10 degrees of helm, so slowly rounding up. We eased the sheets to set the sails then slowly trimmed as the boat responded to minimum helm. We tried to never put on the brakes by steering fast or hard. Kay D, Ricochet and Imp took off into a good lead while the rest of the boats in a bunch fought confused and dirty air. Imp cracked off the wind slightly and rolled through the Kay D‘s lee to take the lead. Imp rounded the speed mark and started the close reach for what would become the finish in front of the club, with the Kay D and the J close behind. Gyle Keating in Wildfire broke away from the fleet and held fourth place at the mark, followed by Philippe Erdmer in Kaitoa. 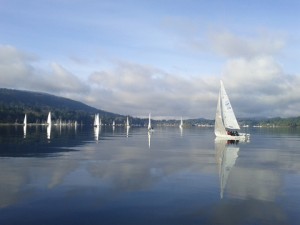 Philippe was able to take time out from the hectic boat handling to capture these telling photo’s. In this shot Imp leads, fourth boat from the right. Kay D is still in second but about to be hunted down by Richard Clark, the farthest right boat, well heeled so the weight of the sails help them to fill. Wendy and Kevin Vine lead the rest of the pack and are about to have a very good second leg. Of note is Velica, the boat on the other gybe right behind the Vines. Vincent has excellent instruments on his boat and a few minutes after this photo was taken, Imp was headed by that wind, tacked over and extended their lead.

This shot shows Wildfire solidly in fourth place but looking a little shy of wind with Kaitoa closing despite no encouragement from her instruments. 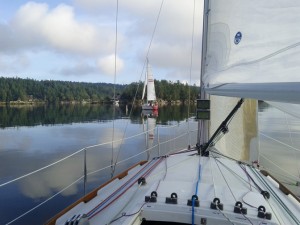 Towards the finish of the race actual ripples appeared on the water and boat speed leapt to almost a knot. Philippe, playing the Goat Island side drove Kaitoa into third place and Gyle brought Wildfire into fourth. The Kay D settled for fifth over the line with the fleet closing in. Deryn Mor, Velica and Quintessence rounded out the finishers. Some, however, smelled the hot rum brewing in the club house and abandoned the excitement of the race for the joys of the table.

A great meal and mugs of the acclaimed hot rum were served in the club by a very efficient and friendly group of volunteers. Times were submitted and numbers crunched and Greg Slakov and able crew of Imp added the win to their line honours, having sailed a very impressive last leg. A gentle but quite wonderful start to our new season, may the winds build and the sun continue to shine on our lovely little club.– Report from the deck of the Kay D by Martin Herbert