According to Uffa Fox the design for the boat came to him fully formed while he luxuriated in the bath tub. Sketched out on a magazine with a pencil while floating in the hot water, he got down her finer points and created the worlds first planing keel boat. “Her mast, rig, the shape of her hull,, the layout of her decks, her shark like fin keel and her rudder, were as clear in my mind’s eye as though the first boat was built and sailing on her trials.” Uffa Fox was a living legend when I was growing up and starting to sail and I was an avid collector of his books on boat design. Throughout my life his influence crisscrossed my sailing adventures, pointed me towards what is valuable in a boat and guiding me to enjoying the sport to its fullest. Over the years I have seen many Uffa Fox boats, ran my hands over Brynhild at the Royal Canoe Club in London, and admired his early I-14’s, the first planing boats, in action. When it came time for me to retire and move to Saltspring it was also time to start thinking about a boat with a keel, with slower reaction times to match my fading abilities. At exactly the right moment Uffa Fox showed up again in the form of the Kay D. I also met Tony Meek, a fabulous sailor who was also heading in the Kay D’s direction from the other side, looking for a boat that was more exciting to sail. Tony knew everything about sailing on the sea and tides and local winds that I did not and he knew about how to handle boats too heavy to pick up and carry. I brought my 50 years of racing experience, mostly in big fleets of boats all the same with very close racing. For Tony it was completing the circle as he had crewed on Flying Fifteens in his youth.

History of the Flying 15

Over the years the FF has never lost her popularity and has continuously grown with fleets world wide. This years World Championships are in Hong Kong and will see strong contingents from Australia and Great Britain attending. This bit of History is from the British web site:

The Flying 15 was designed by Uffa Fox in 1947 and the first hulls built at his Cowes based boatyard. Uffa recounts in his 1959 book, “Sailing Boats” that Jimmy Damant, a Commodore of the Island SC and one of the earliest owners of the International 14, had often encouraged him to; “Design a boat like the 14-footer, but at least 18ft long, that will not capsize. Then you would have a sensible, safe boat, that was fun to sail as well, for the rough and tumble of tidal waters like the Solent.”

Uffa eventually drew-up a hull twenty foot overall, fifteen foot on the waterline and drawing nine inches without the keel. The steeply raked keel adds 2ft 6inches to the draft, the rake helping to remove any weed. The original construction was for a 1/8″ thick diagonal inner skin and 3/16″ fore and aft, honduras mahogany outer skin over 3/8″ x 1/4″ ribs at 2″ centres. The deck was 3/16″ marine plywood. The original design weight was 285lb for the hull with a 400 lb keel. Driving this was a sail plan and mast height exactly as for the International 14 of that period.

Construction methods in the early years were wide ranging, traditional carvel, moulded ply, aluminium, tufnol, and fibreglass being used, before the latest hulls settled on an epoxy foam sandwich with carbon used in high stress areas, which gives a significantly stiffer structure and long competitive life.

A number of well known UK builders constructed 15s in their preferred method . . . including Uffa himself, Medina Yacht Yard, Jack Holt building number 16, Chippendale & Wyatt, Tormentor who built No. 192 Coweslip, presented to HRH Duke of Edinburgh and Princess Elizabeth as a wedding present. Uffa Fox and Prince Philip frequently sailed together at Cowes. And the famous 202, Silver Fox which won championships from 1957 to 73. Even in those early days of the class boats were sailing in Zimbabwe (No. 2) Australia (No. 9) Ireland (No. 10) Jamaica (No. 42) USA (No. 86) Canada (No. 87) and New Zealand (No. 96), even some five boats recorded in Iraq in the 1950s.

For many years the class had traditional wide building tolerances and this led to much experimentation to obtain the best shape for a given sailing location. Eventually Roy Windibank, who sailed at Hayling Island SC, developed a series of moulds which produced fibreglass hulls that dominated the class from the early 80s, winning the Worlds in 1984 and six Nationals with the mark IV. This mould was cloned and used in Ireland, South Africa and Australia. This was followed by the mark IX, which after winning the 1988 Worlds, went to Dave Ovington, where it was later refaired to become the Ovington Smoothie and the basis of a tightening of the construction tolerances in 1993. After ten years of production this was replaced with the Ovington Mk 10, their current production mould.

It was the developments in this last paragraph that lead to the fleet being split into three groups, Classics, Silver and Modern. Each hull development lead to a faster boat and so the older boats were outclassed. For us on the West Coast that is a huge boon as the only boats here are Classics and it means that we can poach cheap boats from England and Australia to bolster our fleet at next to no cost at all. While a new carbon FF would run $20,000-25,000 the Kay D cost Tony and I $1,300 each, about half the price of a good used IOM. Most Classics were built at the front edge of the fibreglass revolution when the thinking was still “robust with an eye to longevity”. While lightly built the Kay D is a marvel of structural engineering which results in our annual maintenance budget coming in at around $60, which is primarily the 1/2 quart of bottom paint that she takes.

This is what Uffa said about the first sail on the prototype: “Her speed, easy handling and low building and upkeep cost convinced me that here was a new world for Yachtsman. Then came a gale of wind and when it veered, we went out into this nor’wester and bright sunshine for one of the most exhilarating sails of my life. To windward she handled beautifully, and off the wind she swooped along triumphantly at what I thought to be 12 knots, while throwing white water out on either side and lifting gaily to every sea. She filled me with enthusiasm…”

She also filled Tony and I with enthusiasm and the big smiles on our faces have caused others to look towards this fantastic little boat. Greg Slakov was struck with twice two foot-itus in reverse and sold Imp (24′) to buy Sprite (20), his sleek Flying Fifteen. Sprite is one of two boats the Philippe Erdmer and Lawrie Neish brought to the Island last winter. This Spring Lawrie drove East again and brought home a 4th boat. Suddenly the possibility of class racing seemed to be at hand and for Greg and Ian Cook a reality as Sprite and Kay D jumped right into a May Wednesday Night Racing series. What fun with the lead changing and wits sharpening at every turn.

As Philippe and Lawrie bring the third boat closer to launch and with the fourth boat looking to be in sailing condition already now is the time to get in on these great boats. Tony and I have enjoyed the shared ownership of Kay D, not only for the reduced costs but for the camaraderie of doing the maintenance. During the Dock Renovations we brought her to my shop with a whole list of things to check out and a short list of fittings we wanted to move. The check list was mostly done by putting a line through the job and we marvelled at how well the boat was built. The moved fittings were to get us in line with the modern fitting placement for jib sheeting, and spinnaker pole adjustments, both well documented on the class web site, which proved to be very good for our speed. Now with Sprite to match against we can test and improve our speed further.

I really enjoy sailing a boat that was designed before I was born (just) that still makes its way to the podium with style and grace. The wind and the water haven’t changed I guess but lots of boat design has happened and yet the Flying Fifteen is still flying strong. I take people out for a sail and they are surprised and delighted, “its so responsive!” is almost a universal declaration. You owe it to yourself to find your way aboard one of these little rockets for a test sail. 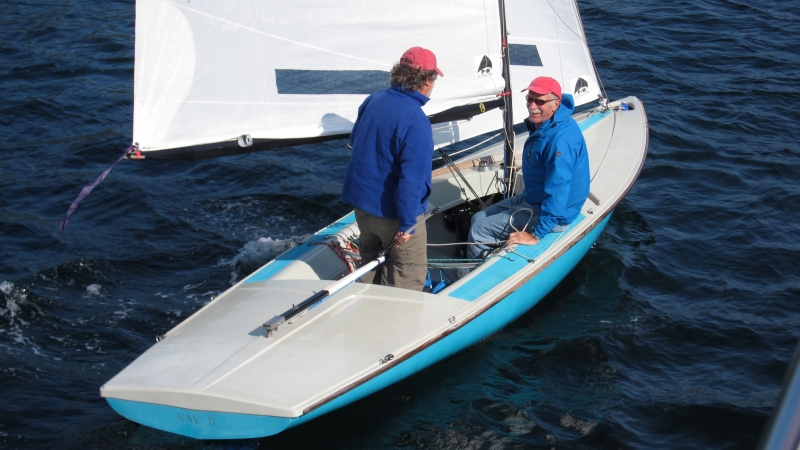