The Club’s history is a testament to its culture – as retired Club Historian John Prothero recounts below, our beginnings were rooted in youth sailing and our Club facilities have always been a product of cooperative effort. Our Sailing School program has recently grown exponentially with renewed energy and enthusiasm, and we still have a junior racing team.  A Marina Renovation Project was completed in the last few years through the dedicated volunteerism that has become a hallmark of our Club, resulting in a topnotch marina. And more is planned in 2019 and 2020.  The Club history, as John notes, is an engaging and on-going story.

The history of the Saltspring Island Sailing Club is a fascinating story, starting with the intense co-operative activity of an able group of students chiefly under the guidance of two individuals: Lawrie Neish, Industrial Arts teacher at GISS, and his wife Aileen. 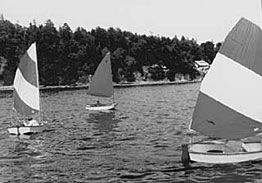 Lawrie took his degree in Scotland, paying his way through school partly by building models. Having emigrated to Canada, they made their way to Salt Spring Island, and before long Lawrie’s students at GISS were building model yachts. That led directly to Lawrie’s mentorship of two students in constructing a Sabot – a one-class wooden sailing pram, 7′ 10″ long (Sabot, French for wooden shoe). Within a year Lawrie and his students had constructed 15 Sabots, at a cost of $100 each, including the sail!

It’s an old saw that if you have a horse you need a farm. Likewise, if you have a sailboat, you need to learn to sail. So Lawrie and Aileen Neish, and Marshall and Norah Sharp, took the students out in their keel boats (Clarion and Sonsy, respectively) for some preliminary lessons. Then these aspiring young sailors were pushed off with Aileen leading them like a mother duck with her brood as Lawrie remarked. He escorted the students in a Sea Scout Lightning, yelling out instructions.

Not surprisingly, the students were soon racing. The Saltspring Island Sailing Club was formed in 1969 and registered with the Canadian Yachting Association in 1970. By 1972–3 the Club acquired a group of adult supporters, many of them junior sailor parents. Club members competed in regattas all over BC, taking first place in virtually all of them. In the Club’s first outside event, Aileen and Robert Neish took first and second place in the Royal Victoria Yacht Club’s Frostbite Regatta. Club members won the under-13 BC sailing championship 10 years running. Over time about 100 Sabots were constructed. These striking successes testify to the talent and enthusiasm of the competitors, and to the quality of their instruction. Moreover, they squarely owe something more to Lawrie, who took shrewd advantage of the tolerances allowed in the Sabot specifications to squeeze out the best possible performance. Lawrie’s crucial contributions to our Club are recognized in his appointment as the Club’s first Commodore (1970–1972).

Evolution and a New Home

Meetings were held early on at Dick and Barbara Toynbee’s home to discuss enlarging the Club, which in 1973 led to a request to the student-based Club to accept adult members. This was ultimately approved and David Smith became the Club’s second Commodore. 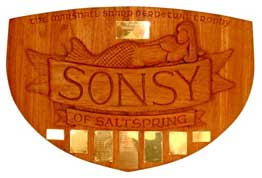 It was the establishment of the Round Saltspring Race, more than anything else, that stimulated adults with keel boats to join the Club. When Marshall Sharp died, the nameplate from Sonsy was mounted on a transom donated by Lawrie and Gus Reuter. Later this became, and remains, a trophy in the Round Saltspring Race. During this phase of the Club’s history the larger boats were moored at Scott Point Marina. In 1976 this marina was put on the block. That fall, the Royal Vancouver Yacht Club purchased the marina and our Club members were evicted.

A committee was struck, and it reported on May 12, 1977, recommending purchase of the present property, subject to purchase of a $1,000 debenture by each of at least 30 members. In fact, over time, 52 members purchased debentures. The late Peter McMillan (Commodore 1977-78) made the down-payment for purchase of the property. 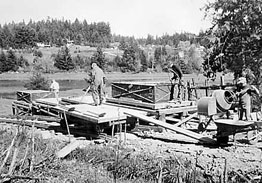 The committee also put forward ambitious plans for the construction of a bridge and docks by Club members. This construction took place mostly on the Richard and Vera Larsen property on Booth Canal Road. It was a remarkable engineering project. It took a month of hard work to construct the metal Saltspring Island Sailing Club 33 forms (into which concrete was poured), the carriage on which the forms were transported, an inclined railway down to the water, an A-frame for lifting the floats, and a (ricketty) walkway out to where the floats were temporarily moored.

Over a period of a year or so some 70 floats were built, each weighing about 800 pounds, which were towed in two convoys from Booth Bay around to our present Club site. A commercial concern put in the pilings, but virtually everything else was done by some 20 very dedicated Club members. Short of the considerable financial risks incurred and the hard work of these Club members, our Club would not have survived and prospered.  To see a couple of photos unearthed by Don Baxter of part of the dock-building process, click here.  To see a full accounting and many more photos of the 1978 project, written by John Prothero, click here or go through the blue Dock History bar at the top of this page. 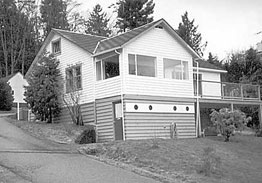 The Club’s property came with a house, originally a floathouse, towed some 200 miles to here from Minstrel Island in 1947. Floathouses were then common at logging sites along the BC coast, chiefly because our shores are mostly too steep to build on. The original owners, Allan and Anna McDonald, lived with their four children in the house in its present location for a number of years before moving to Vancouver. Since becoming a clubhouse it has undergone major renovations by members.

Seen in this synopsis of the Club’s history is a wholesome tradition of self-help, ingenuity, determination and vision which continues to the present day. There is much to celebrate.  And in 2019, the 50th year since the sabot start in 1969, we have been looking back at some of the founding and longer time members in a series of articles called the Founder Profiles.  Click on the following links for the first three:  Lawrie and Aileen Neish, Don and Alicia Baxter, and Roger and Kathie Kibble.