Haida Gwaii Cruise Summer 2019:   We are in the initial stages of planning a trip to Haida Gwaii this summer (2019) and will be scheduling a number of informative sessions including presentations by folks who have made this challenging excursion. These discussions should prove interesting even if next summer’s cruising plans can’t include Haida Gwaii.  It would be beneficial to get some idea of how many Club members would consider embarking on what undoubtedly will prove to be an amazing experience.  Please let Cruise Captain Steve know at cruising@saltspringsailing.ca

PLEASE NOTE BELOW THAT THE ABOVE CRUISE HAS BEEN CANCELLED.

A presentation by Jenny and Nick Coghlan January 19th on their 2018 cruise up to Haida Gwaii was a resounding success attracting an audience of in excess of 50 members.  Their well-researched account of the cruise aboard their Robert Harris designed Vancouver 27 “Bosun Bird” was presented flawlessly, holding the audience spellbound with spectacular photographs of BC’s South and Central Coast and Haida Gwaii.

Segments of the Bill Reid narrated “Rescuing the Timeless Totems of SGang Gwaii”, a CBC documentary depicting the controversial salvaging of totem poles at a deserted Haida Gwaii settlement, was fascinating and can be viewed here https://www.cbc.ca/player/play/1659728755.

The presentation was first in a series of presentations and working group sessions supporting the anticipated Cruise to Haida Gwaii summer 2019.  A very special thank you goes to both Nick and Jenny for their wonderful presentation, as well as to Lynn and Michael Clark for all of their help.

After a number of cruisers encountered schedule conflicts, it was decided that the 2019 Haida Gwaii cruise would be cancelled. There were a number of planning sessions that took place where various topics such as routes and schedules etc. were discussed, all contributing to an opportunity to get together with other cruisers to share cruising-related stories and knowledge. It’s unfortunate that the plans had to be abandoned but we had a lot of fun getting together and planning this event.

Still, I will be heading north departing Saltspring on June 1, with the possibility of crossing Hecate Strait and visiting Haida Gwaii in early July. Cruisers are most welcome to join us for as long as you want. Perhaps Nanaimo is your destination, or Cortes Island or possibly the Octopus Islands, wherever, it would be great to spend some time with fellow cruisers.

Please reach me at cruising@saltspringsailing.ca should you like to join us.

Update on Jeanne Socrates:  For anyone interested in the latest on Jeanne Socrates’ singlehanded worldwide voyage, there is some information through this link, if you read down in the article: https://www.sail-worldcruising.com/newsletter/6326

Please join us on Saturday April 13th and 14th for a combined Cruising and Racing event over to Conover Cove and/or Princess Cove on Wallace Island. Cruisers can either participate in the race (contact FCRacing Greg at racing@saltspringsailing.ca) or not, with the objective of getting together with other Club members and having fun. The plan is to have a barbecue onshore at Conover Cove at around 5pm on Saturday (not a potluck—bring your own meal or arrange to share with friends) and spend a wonderful evening with both old and new friends. We expect anywhere from 10-20 boats which could make rafting-up in the cove a creative challenge and we have the option of anchoring in Princess Cove if need be. Cruisers can reach FCCruising Steve at cruising@saltspringsailing.ca should you have any questions.

Although there was no official Club cruise on this year’s long weekend in May, several boats planned privately to “get out of Dodge” on that Round Salt Spring weekend, to make room for visiting racing boats.  Otter Bay was a fine destination for Don R and Ruth H on Reflections, the Dashwoods on Snapdragon, Heinz V and Lisa H on Umbra, Victoria S and Dennis F on Indira Marie, the Shantz’s on Shaunsea, the de Jongs on Kindheart, the Laidlaws on Nest Egg, the Hetheringtons on Dixey-Rose, and the Vines on Deryn Mor.  Some walks, lots of visiting and Happy Hour on the fabulous patio at the marina took up some of the time.  On Sunday, a group trekked to Hope Bay and lunched at Gather, with really good food and ambience (note to self:  visit there again, possibly a good dinghy jaunt from the anchorage at Winter Cove.)  Sadly, the weather prevented a planned bocce game on Monday, but the old adage of “a good time was had by all” certainly seemed true.  (For more photos, please visit our Club Flickr page.  Thanks to Colleen Shantz and Victoria Skinner for photos.  Click on photos to enlarge.) 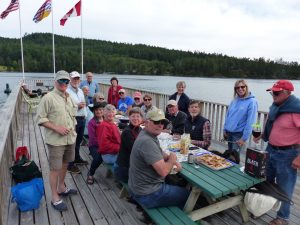 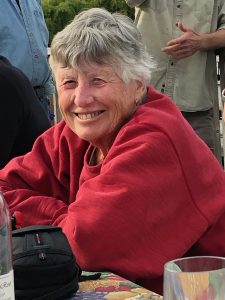 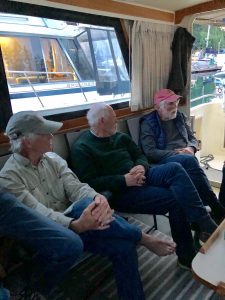 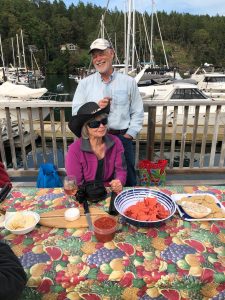 ‘Twas good sailing, wonderful camaraderie, and the usual fun that happens when sailors get together on the recent race-cruise weekend to Boot Cove on Saturna Island.  To read about the sailing and the creative anchoring, and to see some of the fun, go to this post.  (Note that more photos are available on our Flickr page.)