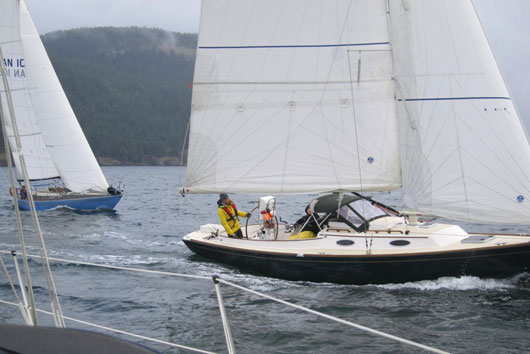 Not deterred by massive Club dock renovations, seven boats and many more sailors showed up for the Ben Mohr Rock race, the first points race of the 2012 Series A. Race officer Lawrie Neish did double duty, ferrying crews from shore to the docks around the massive dredge cranes and barges, and handling horn signals, time keeping and flags to give the racers a proper start. A light breeze was blowing into the harbour, favouring the starboard end of the start line across which a large barge anchored just to windward presented both a major obstacle and a minor wind shadow.

Aboard Caliente, which somehow had ended up with six skippers, many options were discussed before Ole Andersen decided to take the pin (a sailing-by-committee boat, some would call it). By dint of good timing and squeezing out the pesky opportunists crowding the mark, Caliente captured the start. The other starting option was to run down the line and start in clear air and possibly more wind at the port end of the line, and I noticed that Soul Thyme and Paramour moved to that location, so the stage was set for the theories to be tested. 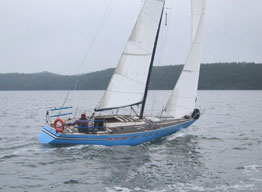 Theory aside, one of the keys to a good race is to keep your boat moving in good wind. And a certain slippery blue boat did just that. Electra with Roger Kibble at the helm found the perfect line of easing out to mid channel into more wind but not giving much away to leeward. He drove right through boats on both sides as Soul Thyme on the far shore had to tack into a header while Caliente, to windward, was sailing in less wind. On the first crossing it was Electra ahead by three boat lengths. Undaunted, Caliente held in towards the Sisters and picked up a good shift to regain the lead but Electra hung on, and these two led the fleet neck and neck out into Captain Passage. 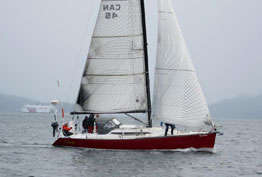 Much bantering about spinnakers had been heard since last week’s “No Flying Sails” race, and Ole had borne the brunt of the abuse from both Tony Meek and myself. Now we found ourselves under his command and so the great red sail went up, and up, and up, and then filled with wind. With Ben Mohr buoy in our sights and the apparent wind just forward of the beam, Caliente stormed along. The SE breeze freshened and backed a little but as we were still laying the mark and getting quite a lead, all seemed well. On the final approach to the mark, however, the wind backed some more and the great red sail had to be hauled unceremoniously into the cockpit by many hands, and we were forced into making two short tacks to the mark (most of the committee of Skippers became the deck jockeys of their youth for a few brief moments). This should have served as fair warning to Electra, heeled boldly and flying her spinnaker, i.e., that the wind at the mark was shifting, but alas she missed the warning signs. We saw Roger beat to the mark and drop to fourth place, rounding right next to his rival and friend Vincent Argiro in Velica (see photo above). Just as we were getting ourselves properly sorted out on the return leg we were saluted by single handing Philip Grange, approaching the mark very much in control with tiller in one hand and mug of tea in the other.

A good close-reach to Scott Point followed, and then a hoist of the monster red chute again for the leg to the Sisters. Behind us, Roger also hoisted a flying sail and moved through the fleet gaining ground at a good clip, reaching second spot again. Then we rounded the Sisters for the run home, with the wind holding deep into the harbour, an unhoped-for bonus. Paramour, once round the Sisters, hoisted her gigantic spinnaker and did what she loves best, running straight down wind reeling in the non spinnaker boats. Wildfire also hoisted a chute, her sights on the Fleet Captain on Soul Thyme for a dramatic finish line battle. Caliente took line honours ahead of Electra. Paramour cruised in third just 20 seconds ahead of Yolanda and 40 seconds ahead of Velica, and Wildfire caught Soul Thyme and finished ahead, concluding a very exciting race. This is the first time that the new scoring system (PHRF Cruising Class) is being applied. The winner on corrected time is Paramour; she would have won under the old system too, and Electra also comes in second either way (though not by much under the old rules). Third, fourth and fifth places are not quite the same as under the old system as the boat times are very close.

It was a great day on the water and as there was good wind at the end, Caliente kept sailing just for the joy of it and thus escorted the rest of the fleet home. Our Race Officer was there to take our times and ferry us back to shore once we had told a few tall tales and all seemed right with the world. – Report by Martin Herbert, guest spinnaker hand aboard Caliente. Photos by Philippe Erdmer.