Three years ago Gyle Keating talked me into doing this long race, his favourite, and it has become mine as well. Two days of racing, a challenging course and an evening of sharp social repartee with good pub food, what more could we hope for? Well, “good wind”, and this year we got it. Check out this shot of Imp and Electra leading the fleet past Growlland Point on the exciting sail home Sunday. 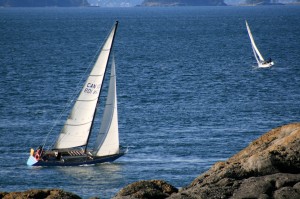 Day one started with wind on the nose and orders to take Prevost to Port. Ten boats lined up and close tacked out of the harbour with Caliente soon taking the lead. Electra was also on her game and was in hot pursuit of the big red boat. They disappeared around Point Liddell ages ahead of the fleet still slogging to windward. Imp, Kaitoa and Velica were round next, followed by Oasis. The final four were Kay D, Merriweather, Second Wind and Quintessence. On rounding the Marker at Point Liddell the two mile view into Navy Channel showed one of the finest sights a slower boat can see, a strong wind beam reach with great surfing waves and all the fast boats fighting tide under the lee of the Pender hills. As we roared down on them, compressing the fleet we also had the added advantage of seeing what was not working and plotting to avoid the problems ahead. Unlike previous years Caliente did not wait for us all to catch up and found a way through Navy Channel. Electra crossed to the Mayne Island side and also found her way out into Plumper Sound in good time. Seeing the parked boats by the Pender side, Kay D hoisted spinnaker and rode the edge of the wind across to the Mayne side as well. Our commodore in his brand new yacht Second Wind was tantalized by a zephyr along Stanley Point and tried to cut the corner along with Merriweather and it looked like their gamble would pay off as they roared by the Kay D, only to be dropped in big tide as the gust vanished. The Kay D was able to creep back and keep her annual tacking dual rendezvous with Oasis, my favourite part of the weekend.

Once out of the Channel it was Caliente firmly in the lead with Electra a strong second. Kaitoa was playing the left side of the Sound while Imp, Velica and Oasis were locked in a fierce battle for position, holding to a more direct line to the finish but up under the hills of North Pender and having to play the willywaws one gust at a time.

Here Philippe Erdmer in Kaitoa showed the way and wrote the mantra for the next day as well…”Sail wide in the wind and go fast”. He sailed a great circle route around the three combatants and pulled to within 40 seconds of Electra’s stern at the finish. Of the three, Imp, closest in, paid the highest price, with Oasis crossing first of the group just 12 seconds ahead of Velica and 32 seconds separating the three boats. Kay D, just behind this action, benefited from the information and was able to play the gusts and close. Second Wind, protecting her wind, edged Merriweather closer to shore and both paid the price as Quintessence sailed around them to take 8th place. All three of these boats had the misfortune of getting a lull before getting clear of Navy Channel and its tide flow and thus missed the first round of drinks ashore at the end of the first day.
Moorage was found and boats secured in advance of the tall tales and sea stories. To my eye Electra was the best sailed boat on this day but the compression of the fleet in Navy Channel seriously favoured the Kay D. The number crunching bore out this assessment but also pointed out the excitement of that great three boat battle and the closeness of the fleet, with 3rd-7th being separated by just over seven minutes. Velica topped this group having raced a solid race.

Some drinks were had and some gatherings on various boats including a very comfortable stop at the Commodores new Yacht. Despite the beam being as great as the Kay D’s waterline length Eric was still sporting a leg wet shin deep from one exciting gust coming down from the Pender hills. We very sensibly went to dinner early to leave enough time for the skipper of Merriweather to hand out lessons at the pool table.

Day two and the sailing lesson giver of yesterday and the lesson learner were seen hovering at the end of the line furthest from shore. Caliente, who was already docked when those lessons were handed out was lulled by the great blasts of wind at the shore end of the start line when the five minute gun went. Kay D and Velica played the middle of the line, perhaps favouring the outside just a bit. With a minute to go the wind faltered slightly and the inshore boats died in their tracks. Kaitoa, Imp and Kay D were off, while Velica, just a few yards up the line was not included in the wind. Electra read the situation and made the best of hers by gybing and heading out just in time to stay in the top group. The top three jockeyed back and forth with the lead, for a while the Kay D on the inside looked strong but then Imp would take off on the far outside. Kaitoa tried to play both sides and as she was not flying her spinnaker was free to gybe back and forth with little penalty, although a gybe to close to the Kay D did cause her to take a penalty turn. Imp took a firm hold on the race and was round Tecce Point first. Electra, finding her groove, had worked up to second place and went round next followed by Kay D. The breeze and the tide were now on the nose and the long slog up Pender began. 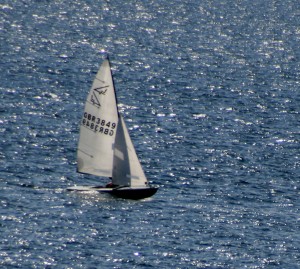 Imp put in a reef as the wind built while the long thin Electra just started to smoke upwind. Sometimes Roger and Electra seem to become one being, a perfect match of man and machine and this was one of those moments. In a perfect case of Stendalism Electra drove up wind, catching Imp when she shook out her reef but failing to bear off at Wallace Point. As Imp and Kay D close reached down Oak Bluffs into Swanson Channel Electra headed for Portland. Your writer was keeping a close eye on this tactic while temporarily moving into second place. Before long Kaitoa charged by a good ten boatlengths to windward and then Caliente shot through to leeward. Then the wind went fickle and these four exchanged the lead a half dozen times as the rest of the fleet closed in. Memories of last year flooded back for many on the course. Vincent took this picture of the Beaver Point Hole, where he spent a goodly length of time then, lesson learned. 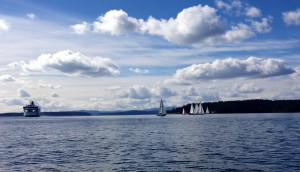 Just to the right of this picture is Imp and Kay D, spinnakers pulling, heading for the Prevost shore and the new wind that would bring them home first and second. Ole brought Caliente through this calm and made a valiant attempt to catch the Kay D for another great battle on the water, twenty seconds behind at the line. A blustery breeze blew up to challenge everyone on the beat into harbour, knocking you flat one second then flapping your sails with wild abandon. Velica sailed another solid race and crossed the line fourth and then three boats, Kaitoa, Oasis and Electra came in a bunch. The shifting wind and wild gusts tried the tired sailors and the boats were packed away slowly with much visiting and yarning to be had. Philippe gathered the times and crunched the numbers and another wonderful race goes into the history books. Kay D wins and Velica’s consistent thirds gives her second place. Imp and Electra both sport a 2nd and a 5th with Imp taking third on the tie breaker. Everyone had moments of glory that will only get more impressive with the telling and that is the nature of a good race.

Next race, Round Prevost, April 7th.

from the deck of the Kay D
Martin Herbert