The 2018 Canadian National IOM Championships are in the books and thirty-four racers from across the continent are mostly home. Difficult wind conditions on day two and three limited the racing to only 9 Qualifying races and 3 Finals, but the races sailed were of top quality. This was largely due to the experience of the race officer, Leah Mathewson, who knew how to set a good course and when not to race. Her professionalism kept all the races fair and her courage allowed her to abandon races that went sideways. We were lucky to have her in command. She was ably supported by Barry Fox, himself a good race officer, who did the scoring and technical magic behind the scenes. Rich Ballantyne and Steve Kibble ran the mark boat and were kept busy by the shifting conditions. Club volunteers kept the social side of things going smoothly, special thanks to Nelly Tom-Kee, Elizabeth Hayes and Rosemary Harbrecht for their hard work and good attitude.

Sixteen American boats came up for the event and their talent pool was remarkable. At the end of the first day of racing they held the top 8 spots and had won all 12 heats. Only two Canadians had made a top 3 score, Bob Lewis and myself. It was humbling but at the same time exciting to be sailing with such skilled sailors. It was a challenge and we knew we would have to step it up a notch. On day two Bob and I rose to the challenge with Bob scoring a 2, 3, & 4 and me a 2, 1, & 2. That brought me up to 5th overall at the end of day two. No match for the leader, Mark Golison, who had eight wins and a fifth. At that point we had two drop races and he dropped the fifth and one of his firsts to be miles in the lead. Although I enjoyed the race that I won, I enjoyed more the race where Mark and I had an exciting tacking duel on the last leg. I was on the Starboard approach to the finish and he could not cross me but he finessed a beautiful tack under my bow and beat me by half a boat length. I could not have made a tack like that and it felt like an honour to be that close and see how it should be done. 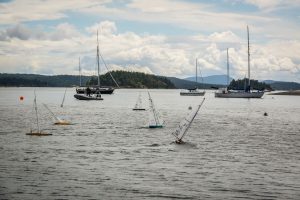 Day three split the fleet into Gold and Silver with the first 17 boats in Gold and the bottom 17 boats in Silver. There were only six Canadians in the gold fleet.  Now for me every race was against the top guys and the pressure was on.  It was apparent that we could not get in enough Final races to get a throw out, any bad race would count against your total score. My first race was good until I missed a mark but a quick hail from a competitor allowed me to correct my mistake and only drop the 5th in that race. Roger got a 4th in his Silver Fleet, so close that it could have been a 3rd, and in the next race got a second. He and Mark Wallace ended the regatta just a point apart in 24th & 25th, with Mark having to count a DNF in the second Final. Ole Andersen, while having some good races was mostly nursing his old boat around the course. He was unable to race on the last day when the nursing failed. Despite missing the last three races he was still able to pull off a 31st. Visions of a new boat might be dancing in his head. My last two races where not stellar and I dropped to 6th place overall. I was still the top Canadian. Bob Lewis was the other Canadian to make it into the top ten. Check the racing board at the gate house for the blow by blow of the races. Thanks for the spectators who came down to cheer us on, we heard you through our concentration and your good words pushed us on. As always our club impressed the visiting sailors, who all are keen to return and race with us again.