Kevin and Wendy Vine were at Montague Harbour a few months ago and met someone who had apparently been an early member of our Club and had what he said was an original burgee from our Club’s early days.  They didn’t end up getting his name or any details, but here is the photo they took (click on photo to enlarge it): 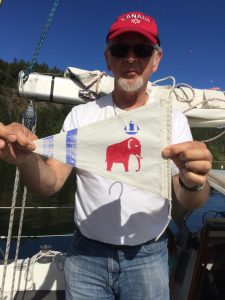 Maybe some longer time members recognize this former member or the burgee.  (SUBSEQUENT NOTE:  Lorne Shantz suspects that this might be actually an old Power Squadron burgee…)